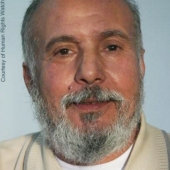 I am deeply concerned about 66-year-old democracy advocate Fathi el-Jahmi who has been detained since March 2004 for seeking peaceful political reforms in Libya. He suffers from diabetes, high blood pressure and coronary artery disease. Without proper medical treatment, his life may be in grave danger.

On 6 February 2008 the Gaddafi Development Foundation (GDF) issued a statement that a court had determined Fathi el-Jahmi to be “mentally unstable” and that Mr. el-Jahmi had been transferred to the Tripoli Medical Center as a result. The GDF failed to explain how the court arrived at their conclusion, or whether medical expertise had been used to reach this diagnosis. A previous claim by Libyan authorities that Fathi el-Jahmi was suffering from mental illness was contradicted by independent medical experts at Physicians for Human Rights and the International Federation of Health and Human Rights Organizations, who stated in a public report that Fathi el-Jahmi remained “mentally strong.” I am concerned that Fathi el-Jahmi’s physical and mental health may have deteriorated due to the conditions in which he has been held, particularly because he appears to have been detained in solitary confinement for much of the period since his arrest on 26 March 2004.

The International Covenant on Civil and Political Rights, to which Libya is a party, states that everyone shall have the right to freedom of opinion and expression. Amnesty International considers Fathi el-Jahmi to be a prisoner of conscience, detained solely for the peaceful expression of his political views. I urge your government to bring about his immediate and unconditional release. I further urge you to ensure that while he is detained, Fathi el-Jahmi receives adequate medical treatment, delivered by professionals with relevant expertise, and that an independent medical assessment of his condition is allowed immediately.