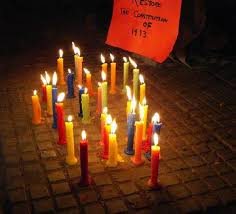 photo from this link: http://pakistaniat.com/images/candles-HR.jpg
“Dignity and justice for all of us”
Join our celebration of the 60th A

Amherst, MA- Since its adoption in 1948, the Universal Declaration of Human Rights has been and continues to be a source of inspiration for national and international efforts to promote and protect human rights and fundamental freedoms. The Declaration is universal, enduring and vibrant, and it concerns us all.

“Any attempt to sacrifice justice not only validates the false dichotomy between peace and justice but undermines the potential for a sustainable end to the crisis in Darfur." said Salih Mahmoud, attorney and human rights defender from Sudan, a country plagued by over 6 millions of Internally Displaced People (IDPs).

It is no surprise that the theme for the Human Rights Day this year is focused on dignity and justice. More than 42 million people have been uprooted from their homes around the world, including 16 million refugees who fled to neighboring countries. Without justice these 42 million would not have the dignity that we enjoy in a relatively peaceful area here in Western Massachusetts.

Sixty years later, we pay tribute to the extraordinary vision of the Declaration’s original drafters and to the many human rights defenders around the world who have struggled to make their vision a reality.

We dedicate our celebration of the Human Rights Day this year to one democracy activist from Libya, Mr. Fathi El-Jahmi, a prominent journalist who has called for democratic reforms in Libya. This month marks the beginning of his seventh year of imprisonment in the horrific prisons of Colonel Gaddafi. We strongly encourage you to send a letter on behalf of this courageous human rights defender (see sample letter at the blog of AI’s Amherst group: http://ai-amherst.blogspot.com/)

Amnesty International vision is of a world in which every person – regardless of race, religion, gender, or ethnicity – enjoys all of the human rights enshrined in the Universal Declaration of Human Rights.
Posted by List Maintainer at 1:44 AM