Thanks to all who made the Fundraiser Tag Sale a successful event that netted us over $500 in 5 hours!

This is a good net revenue especially in this difficult economic time...
Again like in last year's Tag Sale, books sold very good (thanks for the good titles our dear member Nigel and others picked @ the Amherst Book Recycling Ctr).
The low price strategy attracted more students, major customers at any Tag sale in the begining of the school year....
Petitions/information table was another success and donation put in the Stamps jar was over $3... We forgot this year to have Greeting Cards available on the table to write and mail to our POC, Karim Amer (sorry Karim, we hope to send you one when you are free, soon Inshalla!).
Thanks to our elected State legislators, Rep Ellen Story and Senator Stan Rosenberg for continuing to
show their commitment to human rights and support to Amnesty International. Both legislators gave powerful speech and saluted Amnesty International on its 50th Anniversary, and the 32 anniversary of the local chapter
A brief video of their talk will be posted here later.

We also want to remind our members and other human rights activists in the area that the
2010 Northeast Regional Conference will be held on Boston University Campus on Sat Nov 13th. We are hoping many will be able to attend this important event.
The Conference will be divided into workshops and of them will be focusing on auung Sun Su Kyi, one of our adopted POC cases.
Conference registration :
$40 Regular
$30 Students, seniors, Limited Income
Registration Deadline is Mon, Nove 1, 2010

THE LOCAL CHAPTER OF AMNESTY INTERNATIONAL WILL HOLD ITS ANNUAL TAG SALE ON SUNDAY, SEPTEMBER 12, 9 AM TO 2 PM, ON THE AMHERST TOWN COMMON.

Starting at 11 am during the tag sale on the Common, the Amherst area chapter, called Group 128-AIUSA, will pause for a short interval to anticipate and acclaim the approaching Amnesty anniversaries, the 50th of Amnesty International and the 20th of Group 128, both occurring in early 2011. State Senator Stan Rosenberg and state Representative Ellen Story will join us and say a few words to commemorate the occasion. US Representative John Olver, and the Chairman of the Amherst Human Rights Commission, Winslow Reynolds, have also been invited.
The anniversary in 2011 of Group 128 actually can be regarded its 33rd because its forerunner existed since spring of 1978 as a handful of townspeople and students assembled to bring public awareness to human rights abuses and prisoners of conscience. The group grew, was then assisted by Amnesty's New England coordinator, and officially became an AIUSA affiliate in 1991, with many of the original 1978 participants as charter members.
The current coordinator of Group 128, Mohamed Elgadi, now a US citizen and resident of Amherst, was himself a prisoner in Sudan where he endured torture at the hands of that repressive regime, which is still in power. He attests to the effectiveness of Amnesty's actions, remarking that it was after AI brought attention to his and others' situation in Sudan in 1992 that there was amelioration of their ordeal, and he suggests that their eventual release may in large part be due to AI.
The Amnesty International website (www.amnestyusa.org) likewise reports that the work of AI had the effect of moderating severe treatment, and even bringing about a just resolution, in a number of cases.
Every other Saturday from May to November, Group 128-AIUSA has a table on Amherst Common to collect signatures on petitions opposing human rights abuses, death penalties, state terrorism tactics, and supporting prisoners of conscience--among a long list: Aung San Suu Kyi of Myanmar, Karim Amer of Egypt, Birtukan Mideksa of Ethiopia--and to ask for letters to be composed and sent as encouragement to these prisoners seeking justice. When a passerby comments occasionally that these petitions have no effect, Group 128 volunteers often point to the specific experience of Mohamed Elgadi. The next Saturday table days are September 4 and 18, 11 am to 1 pm.
Anyone wishing to donate items for the sale, or to learn about the work of Group 128-AIUSA, can
contact coordinator, Mohamed Elgadi, at mohamedelgadi@yahoo.com
Posted by List Maintainer at 1:02 PM No comments: 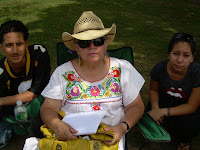 Ester, Ismail, and Cylvanna during one of the Group-128 activities in downtown Amherst.

In the last meeting of the Chapter, the Chilean-American member Ester Orellana, updated the group on the hunger strike of the Mapuche political prisoners in Chile.

"Since the 12th July 31 Mapuche political prisoners have been on hunger strike in the Chilean prisons of Concepcion, Temuco, Valdivia, Angol and Lebu. The political prisoners are demanding the right to a fair legal process, the application of an objective and impartial system of justice and, in particular, the abolition of the anti-terrorist law."

For more information on this urgent case see this link:
http://www.mapuche.info/?kat=8&sida=788
Posted by List Maintainer at 8:51 PM No comments: 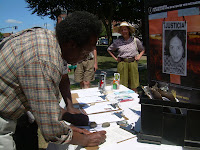 So far we are having a good successful 'tabling' events @ the Amherst Farmers Market.

Our Aug 7 table witnessed good crowd of a diverse poulation from many different towns (and states) who usually come to the popular Farmers market. 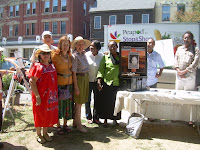 We were joined last week by a group of activists from the
Sudanese immigrants community of upstate NY (Albany, Schenectidy, Troy, and Cobblskill).
They came to visit to learn from our experience how to start a similar 'tabling activity' in their towns that service issues of their interest.
"I think I will be able to start something like this" said Osman who work in a neighborhood store in Albany and was thinking to have an Information table once a month @ his store. Our active member, Martha, encouraged him and offer to provide clipboard and a starting kit.

Our next table will be on 8/21 @ the same place 11am and followed by our monthly meeting @ 1pm.
Posted by List Maintainer at 2:51 PM No comments:

* August 7 is our first Table this month (we will be tabling with Western Mass. Darfur Coalition). Coordinated by Fanny & Mohamed
August 21 is our second table (coordinated by Nigel & Ismael
Don't forget our annual fundraise Tag Sale is September 12 (Sun).
Posted by List Maintainer at 10:27 PM No comments:

The Democratic Republic of the Congo (DRC) must bring to justice those responsible for the murder a human rights defender five years ago, Amnesty International and Minority Rights Group International said.

Pascal Kabungulu, a prominent human rights activist, was killed on 31 July 2005 by a group of armed men who broke into his house in Bukavu in eastern DRC, dragged him out of his bedroom and shot him dead in front of his family.

The trial of the men accused of killing him, who include a Colonel in DRC's armed forces, has been deadlocked since December 2005.

"President Joseph Kabila made a public and personal commitment in 2006 that justice would be done in the case of Pascal Kabungulu," said Claire Morclette, DRC campaigner at Amnesty International.

"The fact that Pascal's wife and six children have had to flee the country and yet his killers remain free makes a mockery of this promise."
Read more...
Posted by List Maintainer at 10:18 PM No comments: